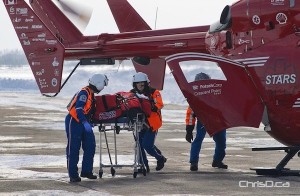 The province suspended STARS on November 28 last year following a patient’s death after being transported to hospital. Since then, a critical incident review of the service has been ongoing to ensure enhancements have been made to improve patient care.

“The decision to temporarily suspend STARS was a difficult one, but I rely on the advice of medical experts,” Health Minister Erin Selby said.

“The medical review process has been concluded, our medical team has signed off on the changes to address patient safety issues to its satisfaction and STARS will now be resuming emergency calls.”

Selby also announced a new, seven-member clinical oversight panel, under the leadership of Dr. Brian Postl, who will provide patient-focused guidance and oversight for helicopter air ambulance service. The oversight will include training and accreditation for personnel, quality assurance for clinical operations and guiding the eventual resumption of inter-facility transfers by STARS in Manitoba.

The non-profit aircraft and its medical team became a permanent fixture in Manitoba after being utilized in the province during the 2009 and 2011 floods. STARS operates on 12-hour daily shifts out of Winnipeg.