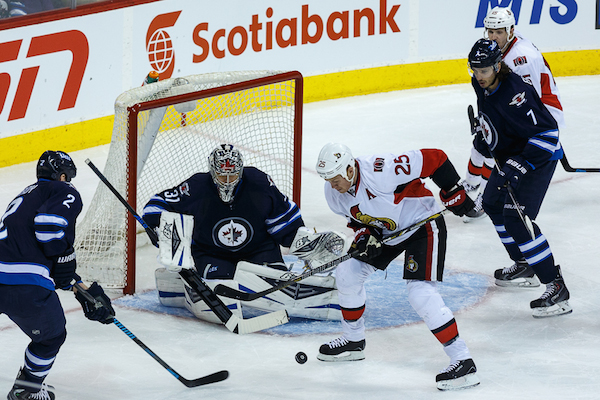 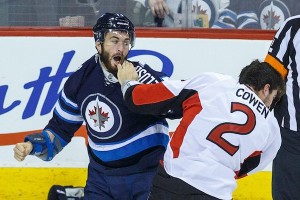 WINNIPEG — Come March, and in the hunt for a post-season berth, three-consecutive losses can be a tough pill to swallow. And for the Winnipeg Jets, who finished their three-game home stand with a 5-3 loss to the Ottawa Senators on Saturday afternoon, the chances of playing into late-April are dwindling fast.

The Jets allowed five goals, including a pair on the power play, before the game’s mid-point, handing the playoff-chasing Senators a healthy lead to protect. Winnipeg’s post-season hopes now reside in a 5.4 per-cent mathematical chance, down from 9.4 per-cent before puck drop (via sportsclubstats.com).

“It wasn’t the best game,” said Jets goaltender Ondrej Pavelec, who was pulled in favour of Al Montoya after allowing five goals on 20 shots. “Things didn’t go the way we wanted, but it’s over now so tomorrow’s another day.”

Pavelec’s record in afternoon games drops to 2-5-1 this season, and to 4-13-3 since the franchise moved to Winnipeg.

“Some strange pucks going into (our) net. Their first three especially,” said Winnipeg head coach Paul Maurice, who falls to 11-5-2 since talking over the coaching duties in mid-January. “I’ve got no problem with (Pavelec). I didn’t take him out to do anything other than hopefully calm the bench down. And he had seen enough.”

“We put ourselves down going into the third,” said Jets defenceman Mark Stuart. “It’s tough to come back. But we battled in the third, for sure, and tried our hardest to come back.”

The soon-to-be 30-year-old Stuart, who inked a new four-year, $10.5-million contract on Wednesday, says he and his teammates are still optimistic despite just a pair of wins in their last seven games and residing two spots out of the final wild card playoff position with 18 games to play.

Winnipeg’s (30-28-7) quick hop to Denver to face the 41-18-5 Avalanche goes Monday night before they return home for three games against the Canucks, Rangers, and Stars.