Home » Columns » Together We Roll — Creating a Roller Derby Documentary

Together We Roll — Creating a Roller Derby Documentary 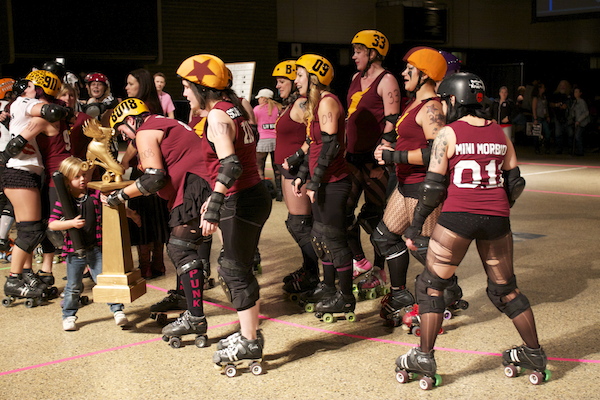 The winning roller derby team of the night, Valkyries’ Wrath, greet a young fan during a game. (EDEN RAMSAY PHOTO)

Winnipeg is home to one of the fastest-growing sports out there and it’s been almost a year since I started making a documentary about it.

With qualities that make it unlike any other, it’s easy to see why roller derby is gaining such a large fanbase. I’ve attended Winnipeg Roller Derby League (WRDL) games for a few years now and instantly fell in love with the sport.

“Together We Roll” is a short documentary (around 10 minutes) covering a number of topics related to derby and what makes it different than other sports. These include how derby is played, its all-inclusive nature, and the challenges players face.

For a breakdown of how the game is played, it’s contact sport with two teams of five members skating in the same direction around the track. A designated player, known as the “jammer,” scores points by passing members of the opposing team. Other teammates, known as “blockers,” aim to assist their jammer, while making it more difficult for the opposing team’s jammer.

As part of Red River College’s Creative Communications program, students must complete an Independent Professional Project (IPP) over the course of their second school year. I was interested in doing my IPP for the League after writing an article about it last year for Red River College’s student-run newspaper, The Projector. Read about my experience here.

When I approached WRDL about doing my IPP project with them, they suggested creating a short documentary about the sport. Its focus would not be on the reality TV-style drama that may exist between players which many other derby documentaries focus on, but on its challenges and positive aspects.

It’s been almost a year since I started filming for Together We Roll last spring. I count myself lucky to be given the chance to work on this project with the WRDL and to have heard the stories of the 10 amazing women I interviewed for this project.

“Most seem to find roller derby in transitional periods…We ruin our bodies to save our souls and for some reason that makes perfect sense.” — Bonnie D. Stroir

This quote came up often during interviews and definitely makes sense after completing the documentary. Women often join derby because they are looking for something more in their lives. Through roller derby they find a fun, healthy, all-inclusive activity, but more importantly, a stronger sense of self and a truly supportive community.

Stay tuned to the WRDL’s website, Facebook, and Twitter pages for details of a screening and panel discussion of Together We Roll in the near future.