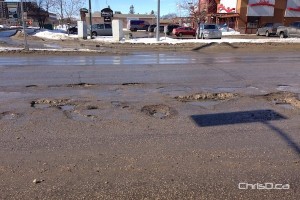 The craters are popping up by the hundreds on Winnipeg streets, forcing drivers to navigate their daily commutes like a minefield.

“Based on what I’m seeing on the roads today, we need to brace ourselves for one of the worst pothole seasons yet,” said CAA Manitoba president and CEO Mager.

CAA has called on the city to outline a plan to tackle the ever-growing pothole problem that is unfolding on Winnipeg streets.

“Winnipeggers need to hear from City Hall what the plan is before the dangerous craters even start to form. I had expected the city would come out and proactively tell Winnipeggers about their plan of attack.”

Streets around the Polo Park area are particularly bad, including St. James Street, where pieces of rebar have showed up.

On March 25, CAA Manitoba will launch its annual Worst Roads campaign, highlighting the worst stretches of road across the province.