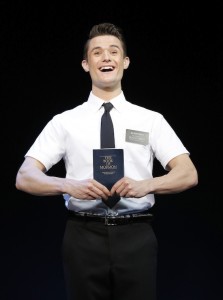 The acclaimed “Book of Mormon” musical will hit the Centennial Concert Hall next year as Broadway Across Canada presents its anchor production.

But before you look too far into the future, there’s still two productions that will play Winnipeg later this year.

“War Horse” visits the city June 18-22. Based on the novel by Michael Morpurgo, the production tells the story of a beloved horse who is sold to the calvary and shipped from England to France, leaving his young owner is despair.

To wrap the season, “Wicked” will run August 20-30. The show was so popular it broke box office records in Winnipeg in 2011.

“This is undeniably one of our most anticipated seasons in recent years,” said Shana Levin, general manager of Broadway Across Canada. “We’re thrilled to continue offering such amazing line-ups to our patrons, and the 2014-2015 Season is sure to exceed expectations.”

Ticket packages are available now at BroadwayAcrossCanada.ca or by calling 1-877-783-4847.