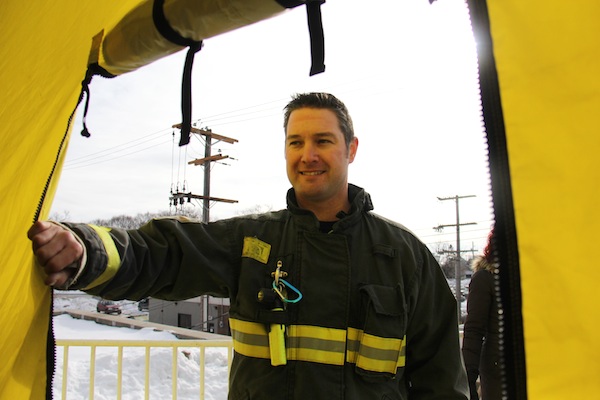 Firefighter Chad Swayze takes a look inside the tent on the roof of the Osborne Village fire hall where he and three others will live until Friday. (SHANE GIBSON / METRO WINNIPEG)

Four Winnipeg firefighters are camping out on the roof of the Osborne Village fire hall to raise money for an important cause.

The fifth annual Winnipeg Fire Fighter Rooftop Campout is in support of Muscular Dystrophy Canada. On Tuesday, Alan Bartley, Chad Swayze, Ben Ritchie and Mike Lisowick were hoisted up by ladder to begin their 72-hour campaign.

On the first day of the campaign, nearly $4,000 had already been raised.

The public can donate by visiting the fire hall at 150 Osborne Street, or by dropping a donation into the boots firefighters will use while at the corner of Stradbrook Avenue and Osborne Street during morning and afternoon rush hours. The campaign wraps up on Friday.