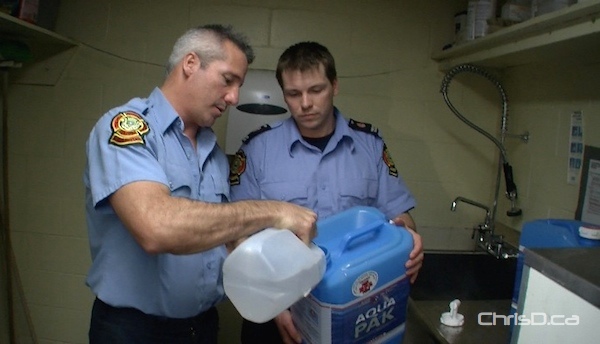 Firefighters sanitize a water jug to be delivered with others to homeowners without running water in Winnipeg. (CHRISD.CA FILE)

The number of homes waiting to have their frozen pipes thawed increased by 49 on Wednesday.

The City of Winnipeg said the wait list now sits at 1,045. Phone calls to the additional 482 properties deemed to be at-risk of having frozen pipes were completed on Tuesday.

Crews are working to thaw frozen pipes and restore water to households around-the-clock, but no time estimate on how long that will take is available.

The city has installed 249 temporary hose lines to some affected homes, but ask residents not to connect their own hoses due to safety regulations.

A total of 5,447 homes have been identified as being at-risk to have frozen pipes, while 1,716 reports of frozen water pipes have been received to date.

Those without water can also request that water jugs be delivered by calling 311. Those able to pick up their own jugs are asked to do so at local fire halls.

Residents who were previously billed $305 by the city for having pipes on their own property thawed are having that fee waived retroactively to February 28.

Charleswood-Tuxedo Councillor Paula Havixbeck said the fee should be waived entirely, despite when homeowners may have been billed for the service.

“What’s the difference whether you had a pipe that needed thawing a month ago, last week or yesterday? And now today we have a different rule. As I said earlier in the week, this should be retroactive for citizens,” Havixbeck said.

Updates on the frozen pipe situation are available by visiting Winnipeg.ca.