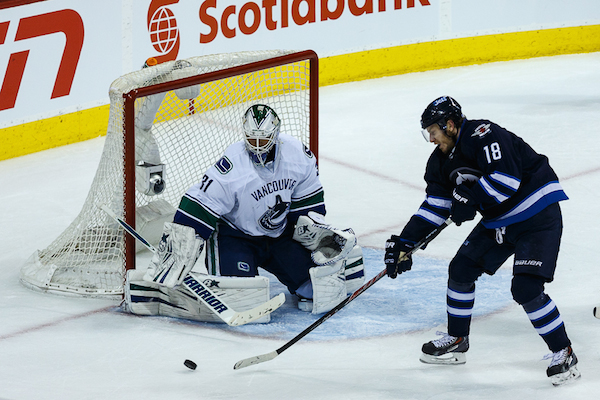 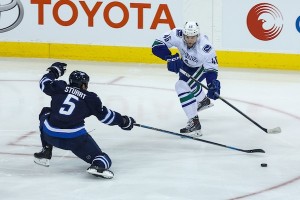 WINNIPEG — Things went from bad to worse for the Winnipeg Jets on Thursday night, dropping their fifth-in-a-row and seventh in their last nine games with a 3-2 shootout loss to the visiting Vancouver Canucks.

And while Winnipeg picks up another single point in the standings — and Vancouver leapfrogs them in the race for a playoff wild card spot — another loss must add up in the collective psyche of the team with their playoff hopes slipping away with just 15 games to play.

“You want to feel (the frustration) a little,” said Jets bench boss Paul Maurice, whose coaching record with Winnipeg falls to 11-5-4 following a 9-2-0 start after taking over from Claude Noel on January 12. “You don’t want to walk in (to the room) and say ‘hey, nothing to worry about.’ You’re putting a hard effort in and you want to get good results from it. When you don’t, you should feel it a bit.”

“It’s kind of frustrating for sure,” said Jets forward Michael Frolik, who scored the go-ahead goal early in the third before Vancouver’s Alex Burrows notched his second of the game — and the season — to send the game to extra time. “Especially back home… we can’t find a way to win the games. It’s tough, but I think we try to stay positive in the room.”

“It’s hard to find a way over here. We need to find it. If you want to have that push for the playoffs then you have to be successful at home.”

Winnipeg has one win in their last five games on home ice — a shootout victory over the Phoenix Coyotes back on February 27 — which has the playoff-droughted club sitting near idle as teams battling them in the standing such as Phoenix, Dallas, and Minnesota all playing .500-or-better hockey of late.

“We understand we needed two (points), so it’s tough,” said Winnipeg captain Andrew Ladd. “We move on. We always do. There’s no point in sitting here tomorrow and harping on it. We’ll move forward.”

The Jets host the New York Rangers and the Dallas Stars on Friday and Sunday night to finish up a four-game homestand.