Home » Sports » Another Jets Loss, As Time Presses On

Another Jets Loss, As Time Presses On 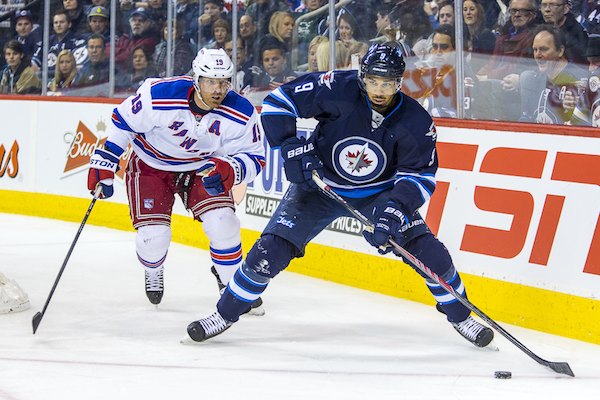 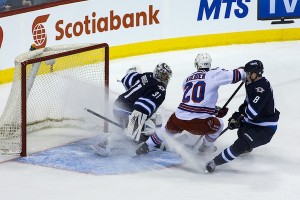 WINNIPEG — Two desperate teams entered MTS Centre Friday night with the NHL post-season quickly approaching, but the Winnipeg Jets — not for lack of effort — dropped their sixth-straight contest, 4-2 to the New York Rangers.

Rangers forward Carl Hagelin skated away with the hat trick, including the game-winner and the insurance marker.

“I thought we had momentum (at) 2-1. We were playing well,” said Winnipeg captain Andrew Ladd of the Jets’ lead just 3:26 into the game. “I don’t think guys in here are giving up. I want to think that we’re trying as hard as we can to get this thing going in the right direction.”

Time is pressing on for the Winnipeg Jets, with only 14 games remaining and just one clean two-point win in their last 10 contests. The Jets have not made the playoffs since the franchise relocated from Atlanta, and have only qualified once (2007) in their 15-year history.

“It’s getting harder right now. We’re really fighting to win and they’re not coming easy by any means,” said Jets forward Bryan Little. “The more it kind of drags on, the harder it is to put (the losing streak) behind you and focus on the next one. Coming into the rink tomorrow is going to be tough because tonight was a painful one that I wish we could just go out and re-do the whole game right now.”

Another painful blow suffered by the Jets was the loss of starting goaltender Ondrej Pavelec, who didn’t return following the first intermission with a reported lower-body injury. An update on his status is expected to come Saturday.

While the Jets final stretch sees matchups with Dallas and Minnesota, teams they are feverishly chasing down in playoff race, they also see top-tier opponents St. Louis, Anaheim, Colorado, Los Angeles, Pittsburgh, and Boston. Seven of Winnipeg’s final 10 games are also on the road.

The tough sled in the final four weeks of the season continues Sunday night as the Jets host Dallas at MTS Centre.