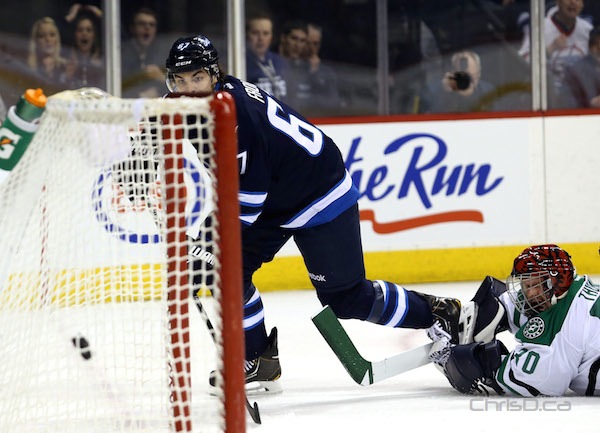 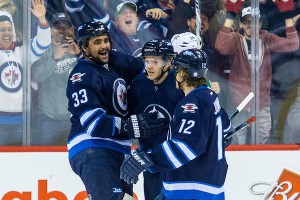 WINNIPEG — It has been tough going for the Winnipeg Jets as of late, but the home club re-ignited MTS Centre on Sunday night with an explosive 7-2 victory over the Dallas Stars, snapping their six-game losing streak and earning them their first win on home ice since February 27.

With 13 games remaining in their regular season, and the 31-29-9 club sitting four points out of the Western Conference’s final playoff spot, the two clean points couldn’t have come at a better time. Dallas (32-24-11) holds that final playoff spot, and a loss to the Stars would have all but officially eliminated their post-season hopes.

“It’s been a tough road for us these last six,” said Blake Wheeler, who tied two single-game franchise records with four even-strength assists (and even-strength points). “(We were) highly motivated and pissed off, and just all the right things to be ready to go. We’ve got these guys again down the road and it’s going to be a really tough game. These guys are a proud group and a really, really good team. And we can’t expect anything like this next time. It’s going to be a really tough game.”

The Jets meet the Stars again March 24 in Dallas in what will likely again be a do-or-die game.

“Really big. Really big. We needed one in there to keep that faith so you’re not pressing as much,” said Jets head coach Paul Maurice of goaltender Al Montoya‘s performance. “He made a couple of real strong saves, and then it got quiet for him for as long stretch, and he was good in the third again.

“It’s an everyone-effort, but these guys battled for me,” said Montoya, who stopped 25 shots for his 11th win of the season. “We came in here with a determination. We invested into this game, and we came away with a huge ‘W.'”

“This is a big game,” added Montoya of their matchup in St. Louis on Monday night against the Blues — the NHL’s top club, touting a 46-14-7 record. “No one is taking any games lightly anymore. The best teams are going to be the best teams, so we’re going to have to go in there and play that blue-collar game.”

Montoya is expected to start against the Blues as workhorse starter Ondrej Pavelec remains out with a lower-body injury he suffered in the first period Friday night.

The Jets return home for a pair of games against the Colorado Avalanche and Carolina Hurricanes on Wednesday and Thursday night.