Home » Sports » U of M Bisons Honoured at City Hall

U of M Bisons Honoured at City Hall 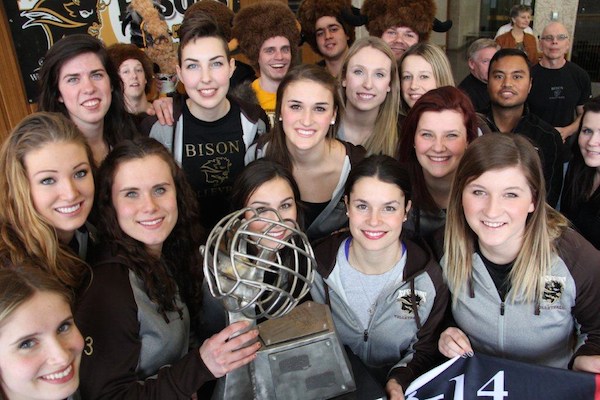 The U of M Bisons are honoured at City Hall on Tuesday, March 18, 2014 after the women’s volleyball team won the CIS Championship earlier this month. (OFFICE OF THE MAYOR)

The University of Manitoba women’s volleyball team was honoured Tuesday at City Hall.

The 2013-14 CIS Champions were presented Outstanding Achievement Award Medals by Mayor Sam Katz for their efforts, which saw the Bisons defeat the UBC Thunderbirds on March 2 in three straight sets.

“Along with talent and skill, it takes a tremendous amount of dedication and commitment to compete at this level, and this team has proven that they have what it takes to be the best in Canada,” Katz said.

The Bisons played a perfect 9-0 in sets at the CIS Championship.

“It was the most complete performance I have ever had over the course of a championship at Manitoba and I could not be more proud of this group,” said head coach Ken Bentley. “To play three matches over three days without losing one set, in retrospect, was a pretty special achievement. That was a testament to the discipline of our team and our play.”