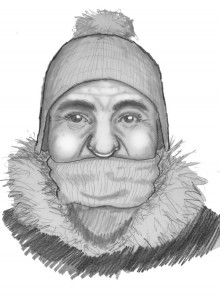 Police are looking for this man after an attempted abduction of a child on Wednesday. (WPS HANDOUT)

An 11-year-old girl was able to break free Wednesday morning after Winnipeg police say a man tried to abduct her.

The girl was walking to school just before 9 a.m. in the area of Arbuthnot Street and Warsaw Avenue when the alleged abduction occurred. Police say the man grabbed the girl by the arm and tried to pull her down Arbuthnot. She was able to break free and police were contacted.

The suspect is described as being Caucasian, between 50-60 years of age, short with a small build and a mole on his face. He was wearing a black jacket, blue jeans, maroon toque with pompom and scarf around his mouth.