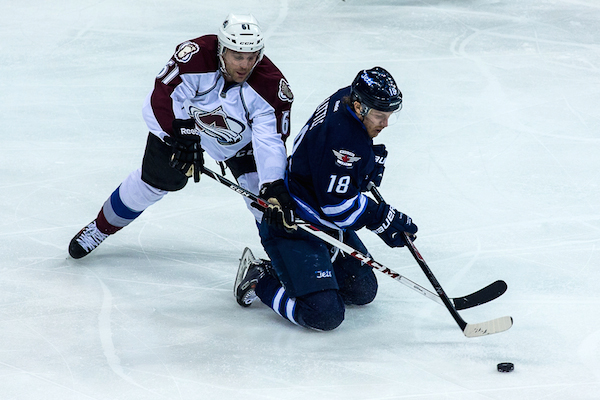 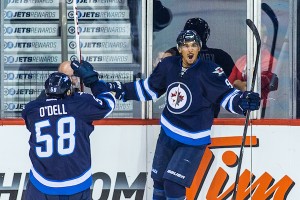 WINNIPEG — For Blake Wheeler it had been nearly three weeks since his last goal. But Wednesday night not only ended his drought — the team’s leading scorer shattered it with a monster game-winner in overtime to gift-wrap the Winnipeg Jets a 5-4 victory over the Colorado Avalanche at MTS Centre.

The unflappable handle by Wheeler in the Colorado zone in the second minute of extra time had the crowd begging for No. 26 to shoot.

“(Michael Frolik) and I had a two-on-one. At first I wanted to get it over to him. It’s been a tough go for me scoring goals,” said Wheeler of his OT-winner, his first in 10 games and his team-leading 24th of the season. “I was trying to find him and it just wasn’t there. I just kept holding on to it, waiting for something to open up. The shot wasn’t opening up. I saw, I think it was (Paul Postma) flying backdoor. I wanted to slide it over to him, and that wasn’t there. So I kept it a little bit longer, and I think on that little pump-fake to (Postma) the goalie kind of slid over and I looked up and saw that I had the net.”

As far as the 15,004 pleading for the American Olympian to pull the trigger when he first had the chance?

“It’s a good thing we don’t listen to those guys,” added Wheeler with a laugh. “I didn’t hear anything.”

It was the fourth-consecutive time the Central Division opponents went beyond 60 minutes to settle the score.

With farm team call-ups Eric O’Dell and Patrice Cormier already centring lines, the Jets suited a bit of a replacement lineup against the Avs, as seventh defenceman Paul Postma strapped them on in place of Zach Bogosian who didn’t feel 100 per cent during warmup, and thirteenth forward Eric Tangradi was thrust into the lineup with Dustin Byfuglien suffering from a nagging lower-body injury.

“If (Wheeler) and (Olli Jokinen) can use their speed and their quickness we’re going to get opportunities,” said Tangradi of his linemates who set him up for his second goal of the season. “I think we kind of meshed right away with our chemistry, and like I said, we were able to use our size and speed to get some chances.”

Jets captain Andrew Ladd also notched a pair of goals, while Blake Wheeler’s three point performance bumps his team-leading point total to 59 with 11 games to play — approaching his career-high of 64 which lead the Winnipeg Jets in their first season since relocating from Atlanta in 2011-2012. He has nine points in his last six games.

The Jets host Carolina on Saturday before heading out on a do-or-die western road swing that takes them through Dallas, Phoenix, and the three California arenas.