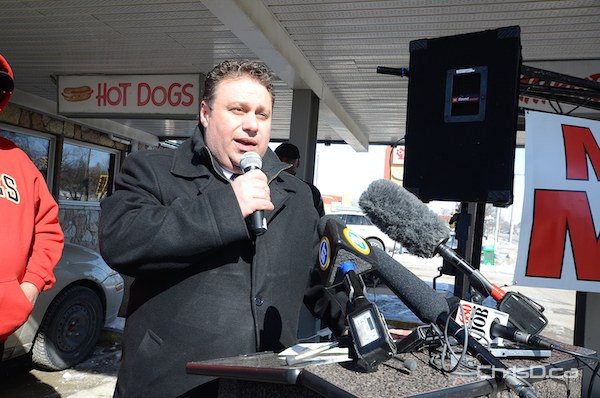 Michael Vogiatzakis announces his candidacy for mayor during a news conference on McPhillips Street on Friday, March 21, 2014. (STAN MILOSEVIC / CHRISD.CA) 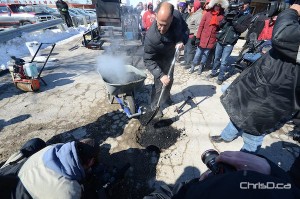 A Winnipeg businessman has an idea for fixing the city’s growing pothole problem and he’s using it to launch his mayoral campaign.

Michael Vogiatzakis, owner of Voyage Funeral Home, announced his candidacy for mayor during a news conference on Friday.

Vogiatzakis enlisted the help of a New Jersey company to demonstrate, what he calls a permanent fix, in solving the road craters that motorists are dodging this time of year.

The Pellet Patch is promoted as hot mix rubberized asphalt and is said not to wear down or come loose in a hole once it’s filled. Saverio Marra with the company says the quick-drying asphalt can handle vehicle traffic in about 10 minutes after it’s poured.

Vogiatzakis has been in the news before. He previously filed two false statements with Manitoba Public Insurance when he was injured and claimed he couldn’t work, but continued to do so. He eventually paid back the compensation he collected to the insurer.

Lawyer and former St. Vital Councillor Gord Steeves is the other candidate running for mayor.

← Previous: Second Marshalls Store to Open in Winnipeg Next: Residents with Temporary Hose Lines Urged to Insulate Them →
Tags: Winnipeg