Juno Awards Week is Here — What You Need to Know

The Juno Awards are in Winnipeg this week, celebrating the best in Canadian music at events all across the city. And while the marquee show is Sunday at MTS Centre, a week full of fan-friendly concerts and artist meet and greets is also part of the fun.

Juno Week — while officially beginning today — was warming up over the weekend with We Speak Music performances at The Forks, where Manitoba school bands and choirs showcased Canadian music featuring compositions by Juno-nominated artists.

On Tuesday, the We Speak Music Performance Series continues at the Manitoba Legislature from noon to 1 p.m. on the grand staircase. The free public event pays tribute to some of Canada’s greatest musicians as school bands and choirs cover their music. 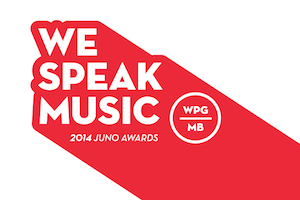 Wednesday: Scène Manitobaine at The Metropolitan Entertainment Centre — A francophone music showcase featuring Franco-Manitoban emerging artists. Tickets are $5 by calling (204) 233-ALLO or at the door.

Thursday: Q Live at the Juno Awards — CBC’s “Q” with Jian Ghomeshi hosts a special live-audience show with guests Randy Bachman, Tegan and Sara, and the Sochi 2014 Olympic Winter Games gold medallists in women’s curling. Tickets are $26.25 to $36.75 at Ticketmaster.

Friday: Juno Cup — Celebrity fundraising hockey game at the MTS Iceplex in support of MusiCounts. NHL greats and Canadian musicians will face off in a fun, competitive, non-contact hockey game. Tickets are $20 at Ticketmaster.

Juno Fest 2014 (Friday and Saturday) — Canadian music hits the streets with a multi-venue showcase of over 100 local, regional and national acts. Showtime is 9 p.m. to 2 a.m. both nights.

Saturday: Juno Fan Fare — Canadian music fans will have the opportunity to meet their favourite artists at St. Vital Centre from 12 p.m. to 3 p.m. Much VJs Liz Trinnear and Scott Willats will host.

Juno Awards After Party — The Metropolitan Entertainment Centre hosts music presented by Dauphin’s Countryfest following the Junos at 10 p.m. Tickets are $20 at Ticketmaster.

For more on these events and other Juno celebrations, visit WeSpeakMusic.ca and JunoAwards.ca.