Home » News » Congolese Gynecologist to Lecture at U of M

Congolese Gynecologist to Lecture at U of M 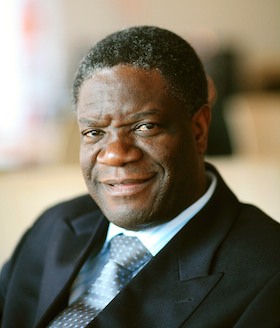 He was awarded Manitoba’s Order of the Buffalo Hunt on Monday, and today, Dr. Denis Mukwege will speak at the University of Manitoba.

Mukwege is the founder and medical director of the Panzi Hospital in Bukavu, eastern Democratic Republic of Congo (DRC).

Mukwege specializes in obstetrics and gynecology, and has performed more than 15,000 operations on women whose genitals and internal organs have been destroyed by sexualized violence and has treated more than 40,000 women overall in the past 12 years.

A public lecture titled, “Protecting and treating survivors of sexual violence,” will be held from noon to 1 p.m. in the Frederic Gaspard Theatre of the Basic Medical Sciences Building on the U of M’s Bannatyne campus.

In his first visit to Winnipeg, Mukwege will also speak at a fundraising event for Make Music Matter on Thursday, March 27. The evening will include dialogue and music at the Pantages Playhouse Theatre with special guest performer Jim Cuddy.