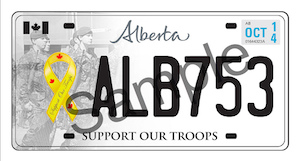 The Progressive Conservative Party has introduced Bill 208 to get the provincial government to issue “Support Our Troops” licence plates.

“We have moved an important step closer to ensuring Manitobans can show support for the men and women of the Canadian Forces,” said Lakeside MLA Ralph Eichler, sponsor of Bill 208, the Driver’s and Vehicles Amendment Act. “Their daily sacrifice ensures we can all live in freedom. I want to also thank all MLAs who helped bring Bill 208 to a vote and for supporting it.”

The Bill was first introduced last November, but was further debated on Tuesday.

If adopted, the plate would include a yellow ribbon and maple leaves, along with the phrase “Support Our Trips” prominently on display.

Alberta is one province who introduced a similar licence plate last year.