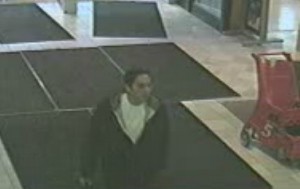 Police are looking for this man who allegedly filmed up a woman’s skirt at Polo Park Shopping Centre. (WPS HANDOUT)

Winnipeg police are looking for a man who allegedly shot video up a woman’s skirt at Polo Park Shopping Centre.

Police say on February 26, the 23-year-old employee was on a break when an unknown man approached her and began making conversation on numerous occasions. The woman proceeded up an escalator to the second floor when the suspect followed her. While trying to distance herself from the man, the woman noticed he was taking video with a smartphone up her skirt.

The man eventually fled the area once confronted.

The suspect is described to have a dark complexion, between the ages of 20-21, 5’11” tall with a medium build and 160-170 lbs. He has short black curly hair and was wearing a dark hoody with a white shirt underneath. Police say based on conversations with the victim, English may be the suspect’s second language.