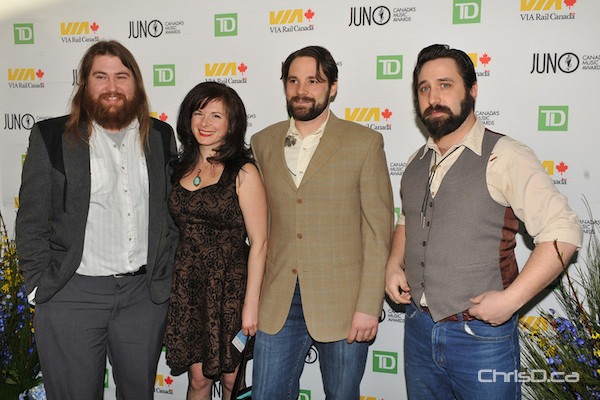 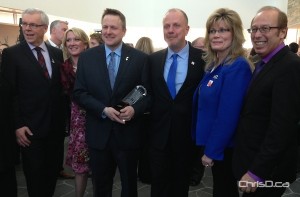 WINNIPEG — The Canadian Museum for Human Rights doesn’t officially open until September, but Friday night was the first big event to be hosted inside Winnipeg’s newest landmark.

The 2014 Juno Awards Welcome Reception was a who’s who affair mixed with nominees, Canadian music industry executives, politicians and the city’s elite. The two-hour invite-only event was a kickoff to the weekend and a lead-up to Sunday’s awards show at MTS Centre.

Musicians made their way in down a green carpet to the flash bulbs of cameras from both local and national media outlets assembled to capture the lavish soiree.

Once inside, CMHR president and CEO, Stuart Murray, greeted the crowd in the Garden of Contemplation — a naturally-lit gathering area surrounded by stone with a view that stretches up the museum’s Tower of Hope. 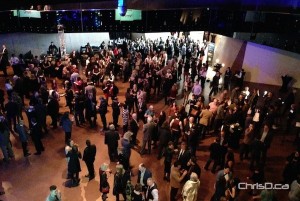 The 2014 Juno Awards Welcome Reception at the Canadian Museum for Human Rights. (CHRISD.CA)

Juno Award Country Album of the Year nominee, Gord Bamford, was among the musicians present. Bamford got up to the mic to introduce Winnipeg music teacher Jeff Kula, who had been presented with the 2014 MusiCounts Teacher of the Year Award earlier in the week. The award recognizes dedicated and hard-working music teachers in Canada who encourage music education for many young Canadians.

Attendees then made their way down a long ramp to the more party-like setting on the main level of the museum, filled with more industry movers and shakers and a dance floor that felt like it comfortably fit the estimated 1,200 people in attendance.

The museum, which boasts a spacious 260,000-square-feet, will open September 20 to the public.