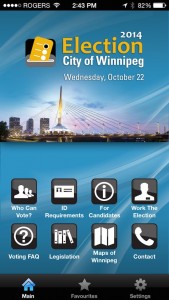 The 2014 City of Winnipeg Election mobile app is a free download. (CHRISD.CA)

With the upcoming civic election this fall, the City of Winnipeg has put out a mobile app to provide election information in a mobile-friendly format.

The 2014 City of Winnipeg Election mobile app is offered in both English and French and works on all iOS, Android and BlackBerry devices.

The app contains everything voters will need to know to cast their ballot, including: where to vote, who is eligible to vote, and voter identification requirements. Further information such as advance voting locations, the official candidate list, and election day voting locations, will be added as they become available.

“This app will allow voters to stay connected with the election while on the go with the latest news, election results and social media updates. We are happy to have another tool for voters and candidates to stay informed”, said Marc Lemoine, senior election official.

Winnipeggers head to the polls on October 22 to vote for mayor, councillors and school trustees.