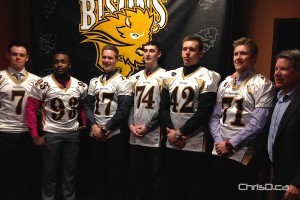 Head coach Brian Dobie introduced the mix of high school and junior program players to the media on Tuesday.

“We are very pleased to introduce these six young players from high school and junior football, who represent the 2014 recruiting class of about 25 local and national athletes,” Dobie said.

The Bisons host the 2014 Spring Camp May 2-4, where approximately 100 players will attend campus.