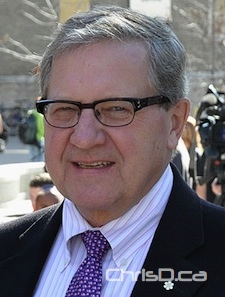 University of Winnipeg president and vice-chancellor Dr. Lloyd Axworthy is heading to Ukraine as part of an official delegate.

Axworthy will travel to the country from April 7-11 with the Washington-based National Democratic Institute, which is fielding a pre-election assessment mission for the May 25 presidential election in Ukraine

The delegation will assess the state of preparations for the elections, including the legal and political environment, through a series of meetings with election officials, presidential candidates, political party leaders, and representatives of civil society, the media, the international community and government.

The delegation will present the findings of its assessment during a press conference on April 11.

Axworthy is the former Canadian minister of foreign affairs.