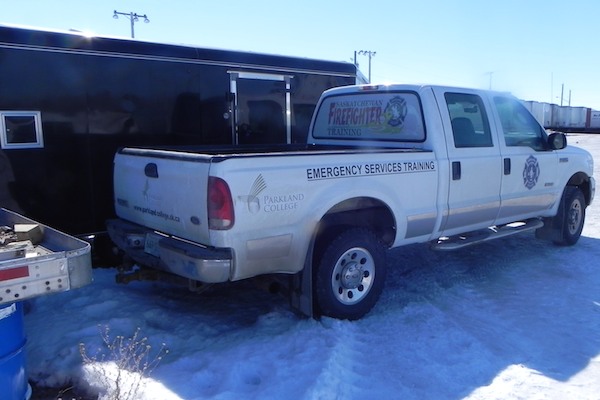 Police are searching for this stolen Ford F-250 from Saskatchewan after it was used in a robbery in Île-des-Chênes on April 1, 2014. (RCMP HANDOUT) 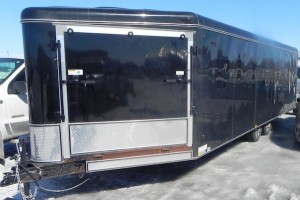 A stolen trailer left behind by the thieves once they hooked up a larger model. (RCMP HANDOUT)

The owner of an Île-des-Chênes ATV business is likely wishing a robbery on Tuesday was a bad April Fools’ Day joke.

Unfortunately, thieves made off with several quads and a 32-foot long snowmobile trailer from Adventure Power Products.

Manitoba RCMP are investigating the sophisticated theft to the fenced-in compound, which is surrounded by a dozen surveillance cameras.

The suspects arrived to the yard in a stolen 2006 white Ford F-250 bearing Saskatchewan plates. The vehicle was stolen from Yorkton, SK on March 25 and has a “Saskatchewan Firefighter Training” decal on the back window and a firefighter crest on both the driver and passenger doors.

The suspects ditched a stolen 26-foot long trailer, also from Saskatchewan, at the scene of the robbery to hook up the longer trailer and make off with the equipment.