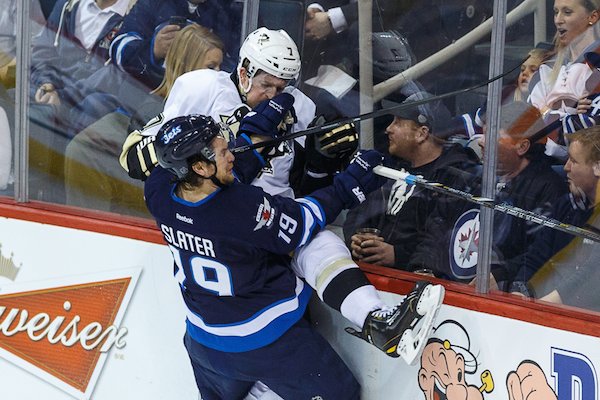 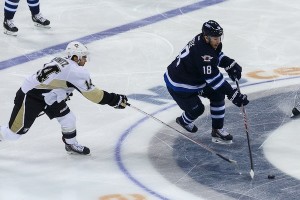 WINNIPEG — Mark it down at seven consecutive seasons without a playoff appearance for the Winnipeg Jets franchise, as the home side fell 4-2 to Sidney Crosby and the visiting Pittsburgh Penguins Thursday night at MTS Centre.

Pittsburgh’s win clinches the Metropolitan Division title, as the Pens enter the playoffs with at least the No. 2-seed in the Eastern Conference. The Jets (and formerly Atlanta Thrashers), meanwhile, have not qualified for the NHL postseason since 2007 — their only appearance since the expansion franchise entered the NHL in 1999-2000.

Evander Kane has been a member of the Winnipeg/Atlanta franchise since he was selected fourth-overall in the 2009 NHL Entry Draft. He sees little change in the big picture since he entered the league.

“It’s tough to see a difference when you’ve been in the same situation year after year,” said the 22-year-old. “But I do in some ways. But time will tell.”

Kane, when asked what is missing in the club from sending them to the playoffs, uses the term “clutchness.”

“When it comes to that word I use I think it’s more so just as a team, coming out and having that confidence. That ‘we want to get the next one.’ Being a little bit more hungry. Instead of winning by one goal, let’s beat these teams and step on the pedal a little bit. And hey, if it’s 6-2 after the game we’re not going to feel sorry for them because they’re not going to feel sorry for us when they beat us like that. I think just more of that killer instinct late in games, and especially when you have the lead.”

Head coach Paul Maurice, who took over the bench duties on January 12 of this year, doesn’t feel it’s time to analyze the overall picture and state of his team.

The Jets goaltending has come under widespread scrutiny as of late. Winnipeg starter Ondrej Pavelec allowed four goals on 21 shots Thursday night, dropping his season totals to a 3.03 goals against average and a .901 save percentage — both statistics ranking 44th in the NHL while playing in the ninth-most games (56).

“I’ll have to go through that (game) and see,” said Maurice of his goaltending against the potent Penguins. “A lot of times when you play Pittsburgh you don’t get a sense of how close some of (the goals against) were, because they get their shots and they put them where they want to.”

The 34-34-10 Jets have four games remaining in their regular season schedule. They travel to Toronto this Saturday night, play their final home games Monday against Minnesota and Thursday against Boston, and then wrap 2013-14 in Calgary on Friday, April 11.