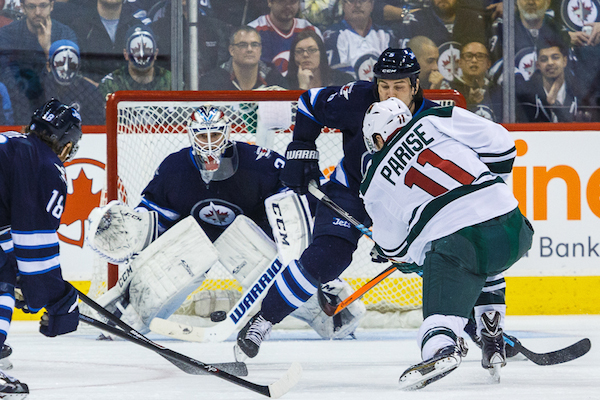 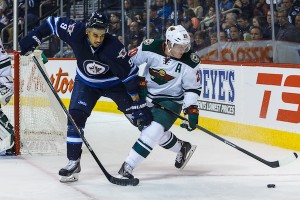 WINNIPEG — The Winnipeg Jets, somewhat riddled with injuries and with their playoff dreams already dashed, fell back to 35-35-10 on the season with a 1-0 loss to the visiting Minnesota Wild on Monday night at MTS Centre.

The Central Division matchup once again saw a very defensive hockey game, barring one 6-4 Jets victory back on December 27. Minnesota improves to 4-1-0 against Winnipeg this season.

“Every time we’ve played these guys this year it’s been very similar styles,” said Jets forward Evander Kane in his first game since he was a healthy scratch on Saturday in Toronto. “There’s not a whole lot of scoring opportunities. Usually the shot totals are low. It was much the same tonight. We just weren’t able to generate enough offence to get a goal — at least to give ourselves a chance to win or tie the game.”

The Jets went 0-for-4 on the power play Monday night, dropping their season total against the Wild to 1-for-15. Minnesota goaltender Ilya Bryzgalov records his third shutout and improves to 6-0-3 since joining the Wild on trade deadline day.

“He looked solid, square, comfortable,” said Paul Maurice of Hutchinson. “And he gave his hockey team a chance to win a game. I was happy with him.”

With two games remaining on the Jets’ schedule, the bench boss feels it may be a chance to see more of the young netminder who started the 2013-2014 season in the ECHL before moving up to the AHL and eventually ‘the show.’

The Jets play their final home game on Thursday against the Eastern Conference leading Boston Bruins, and wrap their regular season on Friday in Calgary against the Flames.