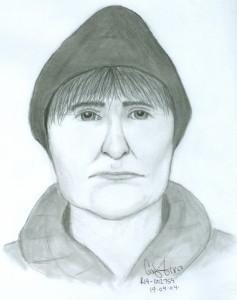 Winnipeg police have released a composite sketch of a man wanted in connection to an attempted abduction on March 29.

Police say a 17-year-old girl was walking in the area of Sterling Avenue and Homewood Drive when a car with three males approached her at around 10 p.m. When the teen refused an offer for a ride, one of the suspects got out of the car and attempted to pull her inside.

The vehicle is described as a two-door blue Pontiac Sunfire.

Police are looking for a Caucasian man, approximately 20-years-old and between 5’10” to 6’0″ tall with a skinny build and short her. He was wearing a dark jacket and jeans at the time.