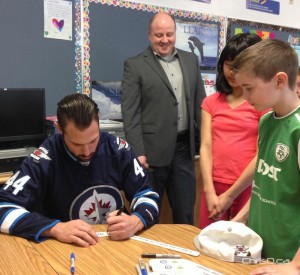 Winnipeg Jets defenceman Zach Bogosian was the guest of honour at St. Ignatius School on Friday to reward students for their recycling efforts.

Bogosian signed autographs and posed for photos with the kids during his brief visit. He’s currently nursing a back injury and won’t play in the final game of the season in Calgary tonight.

About 150 classrooms entered and had to submit their final tally of empty bottles, cartons and juice boxes collected, along with a creative picture demonstrating their work.

“We are proud of the recycling efforts of Manitoba schools, not only during the contest but over the last several months after having introduced Recycle Everywhere 101,” said Ken Friesen, executive director of the Canadian Beverage Container Recycling Association. “We will continue to work with Manitoba schools to help boost beverage container recovery rates and encourage students to have fun while recycling.”

A first place winner was also chosen outside of Winnipeg, where earlier this week the Jets and Recycle Everywhere travelled to Strathclair Community School. Students were presented with 30 official Winnipeg Jets jerseys for their winning submission.