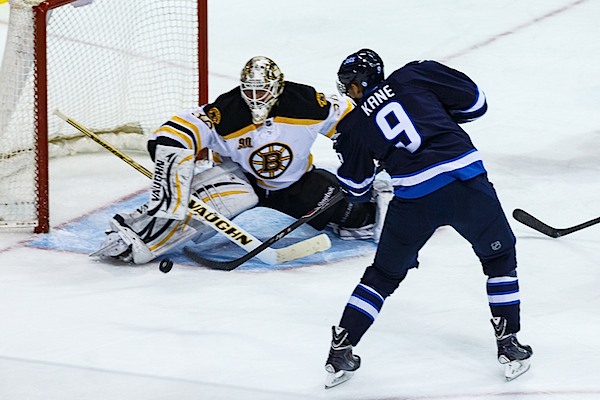 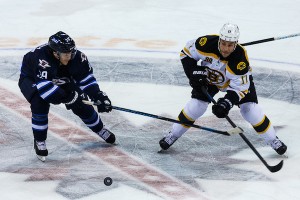 And while the Winnipeg Jets will miss the playoffs for a third-consecutive season since relocating from Atlanta, they provided their faithful with some genuine entertainment and a subtle quench in their final home game of the season Thursday night with a dramatic come-from-behind 2-1 shootout victory over the Boston Bruins.

“Our fans have been great for us,” said veteran Jets forward and leading scorer Blake Wheeler. “We want to give them more. We want to get into the playoffs. We want to show them that there’s progress being made. We wanted to play hard for a lot of reasons tonight. One of the reasons was to leave a positive impact on our fan base going into next year.”

“They’d be pretty darn forgiving — as long as the effort is there,” said head coach Paul Maurice of the recently unfamiliar roars from the 15,004 in attendance at MTS Centre. “It’s the last home game, unfortunately, of the year. People that came to the game tonight saw an exciting game. Saw great goaltending at both ends… They saw their hockey team compete, give what they had.”

Rookie goaltender Michael Hutchinson, in only his second career NHL start between the pipes, was named the game’s first star as he turned away 32 of the 33 Bruins shots he faced.

“I felt determined and relaxed out there. I just wanted to give the team a chance to win and fortunately we came out flying in the third period,” said the 24-year-old, whose parents travelled to Winnipeg to see him in ‘the show’ for the first time. “We definitely took the play to them and we got rewarded with a goal. That’s all you can really ask for is that the guys put forth that effort for you.”

Evander Kane netted the equalizer with just 1:57 remaining in regulation to send the game to overtime. Bryan Little‘s wrister through the five-hole of Boston netminder Chad Johnson in the shootout proved to be the deciding marker.

Despite already being eliminated from post-season play, Maurice ran his squad through multiple skating drills Wednesday morning and into the afternoon in what was likely the longest and most work-induced practice since the Jets returned to the Manitoba capital.

“The people here, they’re excited before the game and they really don’t know what really happened on the ice yesterday (at practice),” added the head coach. “Maybe they read about it, but they don’t care. They want to see their team play as hard as they possibly can.”

Winnipeg’s sub-par 36-35-10 regular season record may have them looking for potential success next season, but the ethic-building session the day before their meeting with the NHL-leading 53-18-9 Bruins surely got them going despite an injury-riddled roster.

Andrew Ladd, Dustin Byfuglien, Zach Bogosian, Al Montoya, and Mark Scheifele were among several regulars out of the Jets lineup due to various ailments.

As is customary at the final home game of the season, the Winnipeg Jets handed out their annual team awards.

The Dan Snyder Memorial Award is awarded to the Winnipeg Jets player who embodies perseverance, dedication, and hard work without reward or recognition, so that his team and teammates might succeed. Dan Snyder was a member of the Atlanta Thrashers who passed away tragically in 2003. Jets general manager Kevin Cheveldayoff presented the 2013-14 award to Bryan Little.

“It’s huge. The first time I won it I got to meet his parents, and it was in Atlanta so it was pretty — they’re great people and it’s a great family,” said Little after receiving the honour for the second time in his seven-year NHL career. “I’ve been with this organization my whole (career) so it’s a real honour for me to win it.”

The Manitoba Hydro Three Stars Award was presented to Blake Wheeler for receiving the most game-star selections of any Jets player on home ice this season.

The Northwest Company Community Service Award was presented to defenceman Mark Stuart for his work in the community through charitable involvement, school, hospital, and community visits, and other philanthropic endeavours.