Riverwalk Closes Due to Overland Flooding 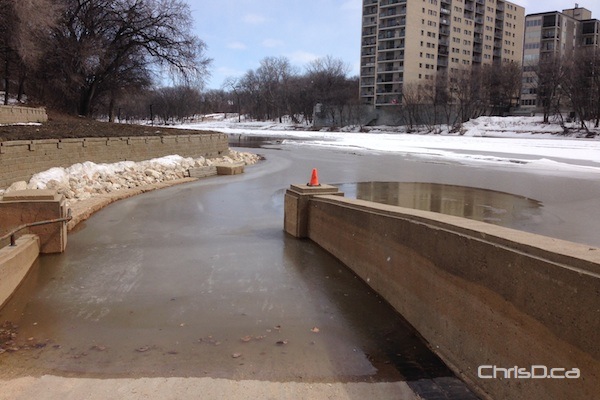 The riverwalk along the Assiniboine River on Monday, April 14, 2014. (CHRISD.CA)

WINNIPEG — The riverwalk at The Forks has been temporarily closed due to overland flooding.

Parks Canada closed the walkway on Monday along the Red River until further notice. The riverwalk along the Assiniboine River behind the Manitoba legislature is also closed.

Freezing temperatures throughout most of southern Manitoba is slowing down the spring melt and reducing the risk of flooding.

On the Assiniboine River, a high water advisory remains in place from St-Lazare to Portage la Prairie due to continuing ice jamming and the potential for additional ice jams and associated flooding. However, while the cold may slow the melt, it may also increase the chance of ice jams forming.

The province opened the Portage Diversion over the weekend to better manage ice flows on the Assiniboine River.

The Red River has crested in Grand Forks, North Dakota and may reach Emerson by Thursday or Friday. From Emerson downstream to Winnipeg, the Red River remains within its banks along its entire length.