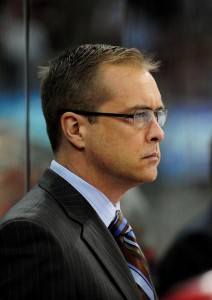 Paul Maurice will be the head coach of the Winnipeg Jets for at least the next four more years.

The hockey club agreed to terms with Maurice on Wednesday, who coached the Jets for the latter part of the 2013-14 NHL season.

The 47-year-old Sault Ste. Marie native joined the Jets on January 12 after taking over for Claude Noel, who the team relieved of his duties after a dismal start to the season.

During his three months with the Jets, Maurice accumulated an 18-12-5 record in 35 games. As a result, he has earned a career NHL coaching record of 478-469-172 after 1119 games between the Carolina Hurricanes/Hartford Whalers, Toronto Maple Leafs and Winnipeg Jets.

Prior to re-joining the Hurricanes, Maurice collected a record of 76-66-22 during two full seasons as head coach of the Toronto Maple Leafs from 2006-08.