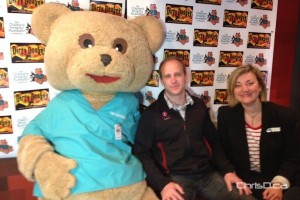 This summer’s Dirty Donkey Mud Run will support the future construction of a new play deck area at the Children’s Hospital — HSC Winnipeg.

The Children’s Hospital Foundation of Manitoba and Swamp Donkey Adventure Races announced the new partnership on Thursday, where the roughly 2,500 participants who take part will be supporting the great cause on August 16.

Race director John Ford said they have set a goal of $60,000 towards the purchase costs for the new recreational space.

“On behalf of the board, volunteers and the over 120,000 sick kids that are wheeled in, brought in or carried in to the hospital each and every year, a huge thank you to Swamp Donkey Adventure Races,” said Lawrence Prout, president and CEO of the Children’s Hospital Foundation of Manitoba. “There are many capital projects, equipment, programs and research that need funding throughout Manitoba. This is a great start!”

Registration for the race is now open at DirtyDonkeyRun.com.