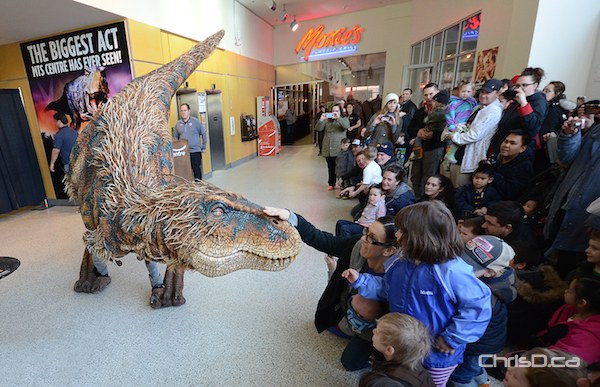 Visitors gather at MTS Centre to greet one of the creatures from ‘Walking with Dinosaurs’ on Thursday, April 17, 2014. (STAN MILOSEVIC / CHRISD.CA) 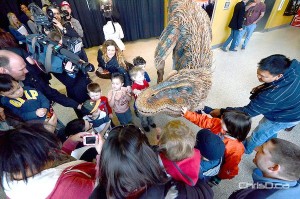 A baby Tyrannosaurus rex roared loudly in the atrium of MTS Centre on Thursday.

The mechanical creature is part of the Walking with Dinosaurs spectacle, which returns to Winnipeg October 8-12. Tickets went on sale today.

Kevin Donnelly, senior vice-president of venues and entertainment with MTS Centre, said the show attracted more than 50,000 people in 2007.

“They returned in 2009 to great reviews so we’re really excited to bring it back once again,” Donnelly said. “This is a show for all ages and we know there is a new generation of dinosaur fans who have been waiting for them to return. The realism and attention to detail is absolutely eye-popping and will entertain all ages again.”

The baby T-rex will make three more appearances tonight in centre court of St. Vital Centre at 5 p.m., 6:15 p.m. and 7:30 p.m. to promote the event and interact with the public. Each visit lasts approximately 10 minutes.