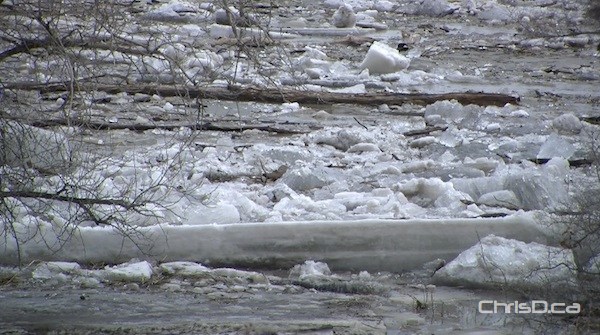 Ice flows upstream on the Red River through Winnipeg on Monday, April 21, 2014. (CHRISD.CA)

While the Red River has crested in Winnipeg and ice jams have caused only minor localized flooding, rain in the forecast could change things, especially west of the city.

The province said the Red River crested at 19.17 ft at 2 a.m. on Tuesday, elevated slightly due to ice jams letting go south of Winnipeg.

However, the rain in the forecast ranges from 40 mm in Yorkton, Sask. to 30 mm in Brandon, 30 mm in the Red River Valley north of Grand Forks, and about 8 mm in Winnipeg. As a result, a flood watch has been issued for the upper Assiniboine River from Shellmouth Dam to Brandon.

“At this time, without a heavy rainstorm, operation of the Red River Floodway gates is unlikely,” reads a statement from the province. “There is localized overland flooding of low-lying land north of Winnipeg.  PR 204 from PR 212 to Selkirk has been closed.”

The Portage Diversion is currently being operated to keep the risk of ice jams on the lower Assiniboine River low. Water is streaming into the diversion at 5,500 cubic feet per second.