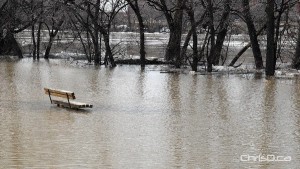 Flooding on Peguis First Nation has forced the evacuation of 34 people from the community and damaged 50 homes.

Water levels appeared to have crested Saturday, but the Manitoba government has sent 100 Tiger Tube dams to assist in flood-fighting efforts.

The federal government and the community are managing the situation, and evacuations are being coordinated by the Manitoba Association of Native Firefighters.

In other areas of the province, the RM of Fisher reports two homes have been protected with water tube barriers and locations where water is over the roads are being monitored.

An ice jam along Birdtail Creek has raised concerns of flooding when it breaks free. Water is building up behind a former railroad embankment just upstream of PTH 45. The Manitoba Emergency Measures Organization (EMO) has advised the rural municipalities of Birtle, Miniota and Rossburn, the Town of Birtle and the Waywayseecappo First Nation and the Birdtail Sioux First Nation. Alerts have been issued by the Manitoba government.

Residents in low-lying areas are advised to prepare for possible evacuations.