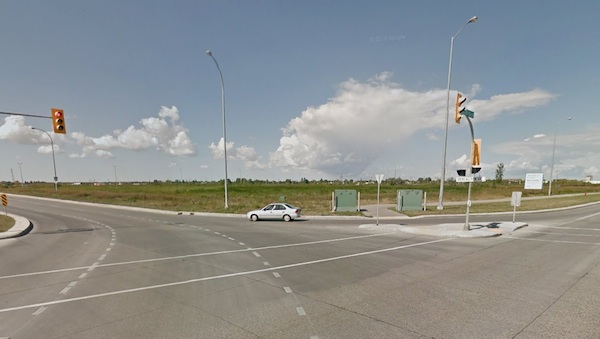 The northwest corner of Sterling Lyon Parkway and Kenaston Boulevard where the future Outlet Collection at Winnipeg will be developed. (GOOGLE STREET VIEW)

A large-scale outlet mall is set to open in south Winnipeg by spring 2017.

The Outlet Collection at Winnipeg will be developed on a 40-acre site within the northwest quadrant of Kenaston Boulevard and Sterling Lyon Parkway across from IKEA.

Ivanhoé Cambridge, Harvard Developments and Forster Projects are spearheading the project at the Seasons of Tuxedo development, which includes 385,000 square feet of retail space.

Developers say the mall will be the city’s first “pure outlet centre” and offer superior brands of value retail from more than 90 renowned retailers, all housed under one roof.

“We are thrilled to work alongside established real estate players to bring the Outlet Collection experience to Winnipeg, which promises to offer an unparalleled retail mix to local shoppers and tourists from neighbouring provinces and U.S. states,” said John Scott, senior vice-president of development at Ivanhoé Cambridge in a release.