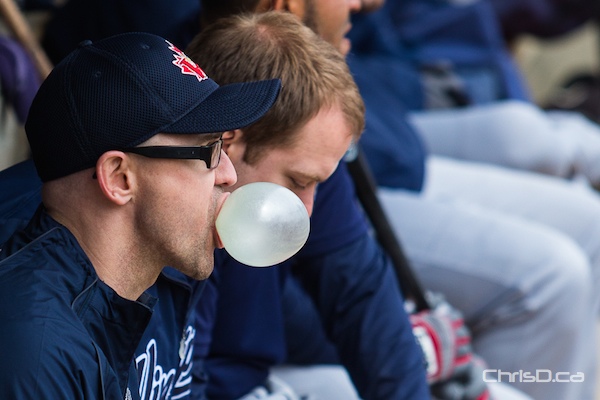 Jeremy John of ‘Breakfast Television’ blows a bubble in the dugout during his game with the Winnipeg Goldeyes on Sunday, May 4, 2014. (SHAWN COATES / CHRISD.CA) 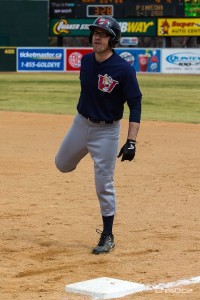 WINNIPEG — A lifelong dream came true for local television personality Jeremy John on Sunday afternoon, as the recently-turned 40-year-old was given the birthday present of a one-day professional baseball contract with the Winnipeg Goldeyes.

“It was wonderful, man. I can’t tell you how happy I am,” said John, who hosts “Breakfast Television” on City. “So exciting. So much fun. I was talking to the guys all day long. I’m sure they got tired of me telling stories about going on the Go-Train to Exhibition Stadium. I daydreamed about this chance, and I can’t believe I touched one.”

John fouled one off against a full count in his first-career professional plate appearance in the bottom of the eighth. He eventually advanced to first with two out and his Goldeyes leading 20-0 over the University of Winnipeg Wesmen in the third-annual exhibition game between the two ball clubs.

“I had a whole bunch of people tweeting me (@BTjeremyjohn) and telling me how I was living their dream, and that’s exactly what it was,” added the now retired pro. “I was the fan in the stands who loves this team and loves this game and I got a chance. I can’t say thanks enough to the Goldeyes for letting me be a part of this.”

John received some advice and pointers from a friend both leading up to and during his big day.

“I was just trying to tell him to relax,” said veteran Goldeyes third-baseman Amos Ramon, who worked with John ahead of Sunday’s game. “It was kind of hard for him to get relaxed. It’s a big game. He got in to pinch-run, so he kind of got in there early so it wasn’t that whole big at-bat.”

John came in as a pinch-runner on two occasions; in the sixth with two out, and in the fourth where he crossed the dish to make it 10-0 Fish on a sac-fly.

“He actually scored — had to tag up. It was quite funny,” joked Ramon. “No, good for him. He did a great job. He walked. He touched one. I didn’t think he would to tell you the truth. He did a really good job today. We’re glad he came out here and had some fun.”

“It has changed the way I see the game, and it changed the way I will come to games,” concluded a beaming John in his final post-game media availability after signing some autographs for fans. “I have a brand new appreciation for just how talented those guys are and how hard their job is.”

The Goldeyes begin their 2014 regular season on May 15 on the road against the Amarillo Sox. The first home game at Shaw Park is May 26 when the Sioux City Explorers come to visit.