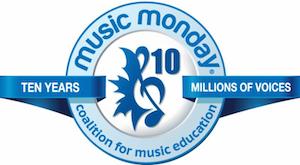 Students from five Manitoba middle schools performed at the Manitoba legislature on Monday as part of a national event to raise awareness for music education.

Music Monday, the Coalition for Music Education in Canada, celebrated 10 years of the signature program with a live webcast connecting simultaneous events across Canada including a synchronized performance of the song I.S.S. (Is Somebody Singing) featuring former Canadian Space Agency astronaut Col. Chris Hadfield and led by Maestro Bramwell Tovey of the Vancouver Symphony Orchestra.

“We have marked an important milestone with Music Monday’s 10th Anniversary,” said Holly Nimmons, executive director of the Coalition for Music Education. “Not only has it been an extraordinary celebration, but we have felt the power of music from coast-to-coast as Canadians raised their voices to let the country know that we are passionate and committed to preserving, investing in and protecting music programs in our schools.

The nationwide event virtually united approximately 350,000 Canadians to help bring awareness to the importance of music education for young people.