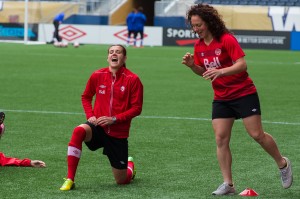 WINNIPEG — The turf at Investors Group Field has been transformed from a football field to a soccer pitch for Thursday’s Canada vs. U.S. women’s friendly.

The two national teams completed their last training session Wednesday afternoon under a cloudy sky before the rain began.

“I think it’s going to be the Desi (Desiree) Scott show tomorrow,” Canada head coach Jon Herdman said during a news conference. “It’s a proud moment for the team — we’ve all got a massive smile on our face, because the local girl gets to come home.”

Scott is Canada’s Winnipeg-born midfielder and a product of the Notts County Ladies in England. The former University of Manitoba Bison has been the star attraction this week as she makes the media rounds to promote the event. 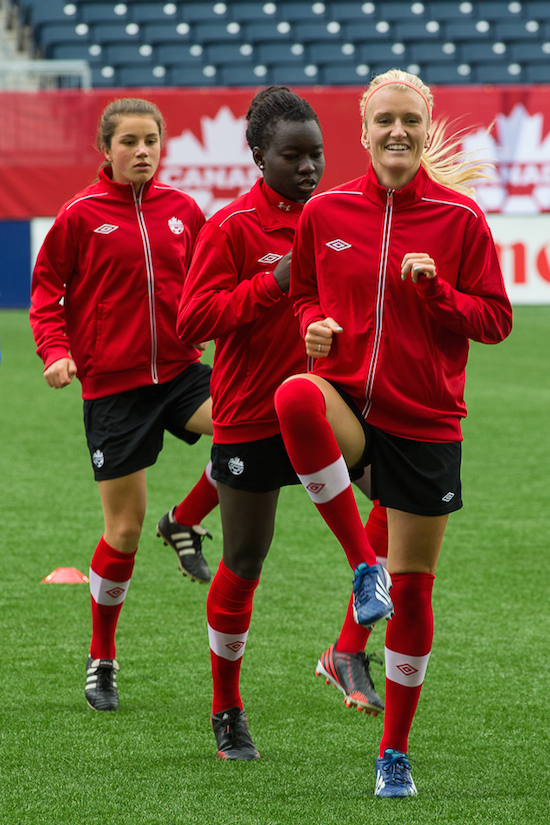 “I’m just trying to thrive off the excitement of playing at home and being in front of my family and friends,” Scott said.

The 26-year-old joined U.S. player Lauren Holiday behind the mic to take questions from reporters teeing up the game.

“We played last year in the NWSL together for Kansas City,” Scott said of her rival. “We’re both very competitive, so on the field we’ll be going at each other — midfielder versus midfielder — but we’re cool off it.”

Herdman says Canada has 350,000 players involved in the sport, but can’t consistently produce a podium team like the Americans do. It’s a challenge for the English coach, who said the work being done now is about building the layers to produce more athletes like Desiree Scott and reaching players in more rural areas.

Staff from FIFA were at the stadium earlier in the day scouting out the venue before Winnipeg is in the spotlight again next year. The city is one of five Canadian destinations chosen to host a series of matches during the 2015 FIFA Women’s World Cup.

About 30,000 fans are expected to attend Thursday’s event. Gates open at 6 p.m. for a 7 p.m. start. Those not attending can catch the game live on Sportsnet 360.