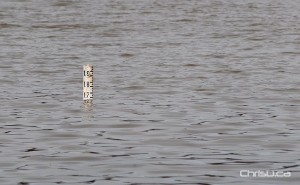 A marker measures the height of the Red River near St. Adolphe on April 23, 2011. (STAN MILOSEVIC / CHRISD.CA FILE)

WINNIPEG — Evacuees from Ebb and Flow First Nation displaced during the 2011 flood will be returning to their community.

The federal government has built 29 new homes and reestablished primary road work, which was completed in April. The construction came at a cost of $8.7 million.

“The 2011 flood was a traumatic event for Ebb and Flow First Nation, and especially for the many people who were evacuated because of the severe infrastructure damages,” said Chief Nelson Houle. “Returning evacuees home is an important step in the recovery of our community.”

A total of 51 evacuees will begin returning home in the coming weeks.

According to Environment Canada, the 2011 Manitoba flood cost governments in excess of $1 billion.