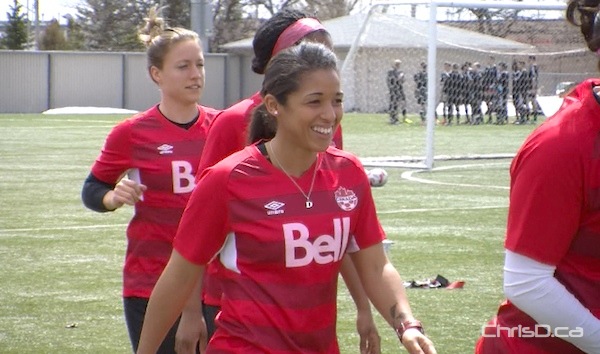 Desiree Scott practices with the rest of Team Canada in Winnipeg on Monday, May 5, 2104. (CHRISD.CA FILE)

A new full-sized indoor soccer complex will open next year in north Winnipeg, providing year-round recreational space for thousands of local youth involved with the sport.

The Garden City Community Centre expansion will see 120,000-square-foot of playing space on artificial turf, and will complement an existing indoor soccer facility, as well as two new indoor ice rinks that are currently under construction there.

The 120,000-square-foot, $20.5 million soccer pitch will be cost-shared between the city, province and Winnipeg Soccer Federation.

“This exciting partnership is a terrific step in the Winnipeg Soccer Federation’s plans to meet its mandate of providing top quality facilities for the growing participation in soccer and other green-field sports,” said Peter Muir, chair of the WSF.  “We are very excited that the province and city recognize the benefits of fitness and the self confidence that are built through the beautiful game.”

The fully-lit complex will also have the ability to be split into four smaller fields as required.

This will be the third major indoor soccer facility in Winnipeg, building on similar complexes at the University of Manitoba and the future University of Winnipeg project to open in the fall.

Construction will begin this fall and be completed in time for the 2015 indoor soccer season. The outdoor field will be used as one of the training fields for FIFA Women’s World Cup Canada 2015.

The announcement comes a day before Canada’s national women’s soccer team hosts the U.S. in a friendly game at Investors Group Field on Thursday. More than 25,000 tickets have already been sold.