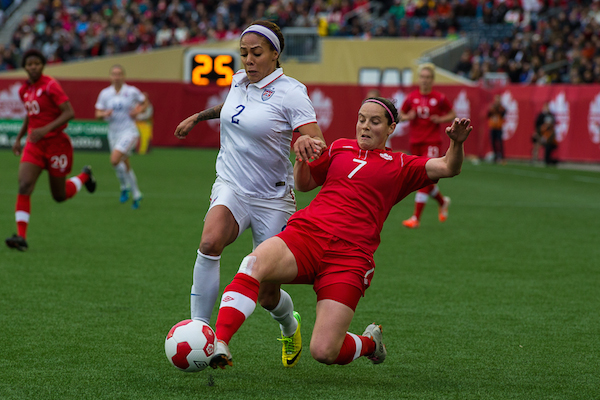 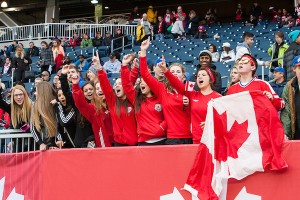 WINNIPEG — The reigning Olympic bronze medalists likely pleased the 28,255 in attendance at Investors Group Field on Thursday night, as Canada’s women’s national soccer team held a 1-nil advantage until late in the game before finishing a 1-1 draw with the FIFA No.1-ranked Americans.

The crowd — officially the second-highest attendance all-time for an international women’s soccer match in Canada — bodes well a year out from the 2015 FIFA Women’s World Cup to be held in several Canadian cities, including Winnipeg. Back in 2003, a friendly between Canada and Mexico drew a record 29,953 at Edmonton Commonwealth Stadium.

“Winnipeg came out and showed exactly what they’re all about, and I think the World Cup is only going to be even better,” said Canada midfielder Desiree Scott, a Winnipeg-native and University of Manitoba product. “Walking out there and hearing the anthem play, and just looking in the stands and seeing those 30,000 fans there, it was exhilarating and exciting.”

18-year-old Canadian Kadeisha Buchanan put the home side ahead in the final moments of the 35th minute, knocking a header past U.S. goalkeeper Hope Solo on a well-placed corner kick from Diana Matheson.

“The crowd, the huge fans brought a little power behind us and I think we managed to put that on the field tonight,” said Buchanan, who was named Player of the Match. “It (feels) really incredible (to score) against top goalkeepers, top players. I managed get a head on it, so it’s been really exciting and it’s an awesome experience.”

“It was a big crowd. Big atmosphere,” said U.S. interim head coach Jill Ellis. “The adrenaline was pumping. I just think we needed to control and calm ourselves a little bit.”

Calm themselves they did, as the Americans, who now hold an all-time international record of 47-3-6 against Canada, controlled possession for the majority of the second half while trailing 1-0.

In the 53rd, Canadian keeper Erin McLeod made a critical save by ripping the ball away from the always-dangerous American striker Abby Wambach who made a lovely header attempt in close off a free kick.

But it was in the 78th, when American Crystal Dunn made a threatening cross and Canadian defender Rebecca Quinn stepped in and headed the ball in a clearing attempt only to have it find the foot of the U.S.A.’s Sydney Leroux who blasted it past McLeod.

“Disappointed, I’ve got to say,” said Canadian head coach John Herdman. “You’re one-nil up against the number-one team in the world with fifteen minutes to go. I’m not going to be standing here clapping and whooping. We should win them games. And we had a great chance to topple the U.S. tonight. That would’ve been a hell of a step in our confidence.”

“All in all, I think they left everything out there and that’s all we ask of them girls every time they play. They’re an honest group and they did everything they could. I keep saying this; the future was on show tonight.”

Canada is currently ranked No. 7 in the world by FIFA.