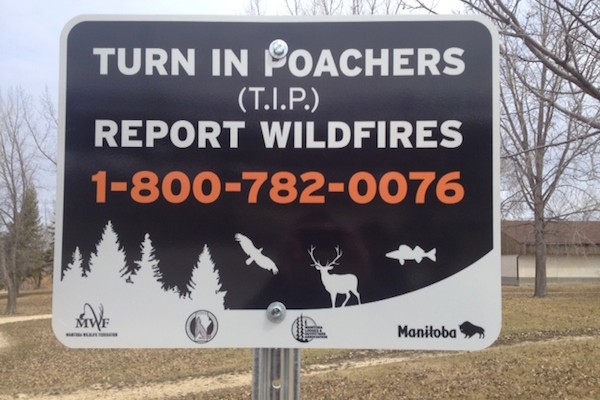 Signs like these are going up across Manitoba in an effort to catch poachers. (MLOA / HANDOUT)

A new campaign aimed at turning in wildlife poachers has been launched in Manitoba.

Fishing season opens on May 10 and anglers are being asked to keep an eye out for anyone who threatens Manitoba’s fish and wildlife populations.

“We felt that producing these new signs would be a great way to encourage anglers, hunters, hikers, boaters, and anyone else out enjoying the outdoors to keep an eye out for poaching,” said Paul Turenne, executive director of the Manitoba Lodges and Outfitters Association. “Poaching is unethical and illegal and we don’t want to see anybody getting away with it.”

The signs were funded through the MLOA’s Hunter and Angler Preservation Fund.

Dan McMahon with the Manitoba Natural Resource Officers’ Association says officers look for violations like keeping too many fish, ignoring size limits or hunting out of season.

The project is being led by the MNROA, the Manitoba Lodges and Outfitters Association, and the Manitoba Wildlife Federation.