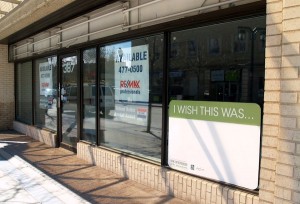 The city and province have launched a new program to spruce up the appearance of some businesses operating in the Sports, Hospitality and Entertainment District (SHED).

The SHED Facade and Storefront Improvement Program encourages commercial building owners to upgrade their storefronts and will cover a portion of the renovation costs, up to $20,000.

The 50-50 cost-shared program was announced by CentreVenture Development Corporation at their annual general meeting on Tuesday.

“When storefronts are attractive and welcoming they are likely to see more business and foot-traffic which creates more vibrancy in our downtown,” said Mayor Sam Katz.

Businesses in prime locations and corner lots will be eligible for up to $30,000.

A new pop-up retail pilot project called PUSH was also announced. It offers start-up retailers space to operate in a storefront setting and was modelled after similar concepts in other cities.

The first shop is Exchange Uporium, which will operate at 70 Arthur Street until September 20.