Home » News » Could the ‘Astronaut Workout’ Be the Next Training Trend?

Could the ‘Astronaut Workout’ Be the Next Training Trend? 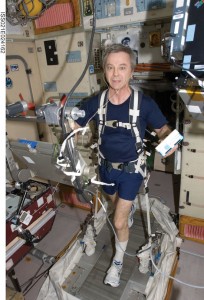 (NC) — On Earth, it would already be the next workout craze. Months after his videos of science experiments and everyday tasks such as shaving, brushing teeth and making a sandwich in space took off, Chris Hadfield’s YouTube clips about health and exercise have quietly gained their own devoted fan following.

Not only are people watching with interest as astronauts exercise, some are even copying those space voyagers’ training routines. To date, over 24,000 people have participated in NASA astronaut Mike Hopkins’ “Train like an astronaut” program.

So why work-out like a space cadet? For one thing, astronauts train as if their lives depend on it: To stay alert and useful during the strains of launch, re-entry and spacewalks, career astronauts need to be in good physical shape.

They also need to exercise just to keep their muscles and bones from shrinking. Without having to ‘fight’ against gravity, humans can lose 1-2 per cent of their bone mass every month.

“From the moment you get into space, you are literally peeing out your skeleton,” Hadfield has said, of the accelerated bone-loss that happens on modern space missions.

To help make-up for this, astronauts on the International Space Station are required to exercise two hours a day. During their workout, ISS crew have their choice of a stationary bike, a micro-g treadmill, or a one-of-a-kind resistance machine that simulates training with weights.

And astronauts don’t just flop on the couch when they’re not in space. An example training day to prepare for a mission might involve a jog, work with a medicine ball, pull-ups, box jumps, and a series of sprints.

While it’s not a program you can buy on DVD or Blu-ray (yet) training like an astronaut could be an Earthly new way to shoot for the stars.

For more on how astronauts exercise, visit asc-csa.gc.ca.

1976, 2013 – The Olympic flame is “transmitted” as a series of electric pulses from a Greek satellite to Canada for the Montreal Games; the Olympic torch (unlit) travels into space on a Russian Proton rocket as part of the Sochi torch relay

2007 – NASA’s Suni Williams runs the Boston Marathon from the International Space Station; in 2012 she becomes the first person to complete a triathlon in space