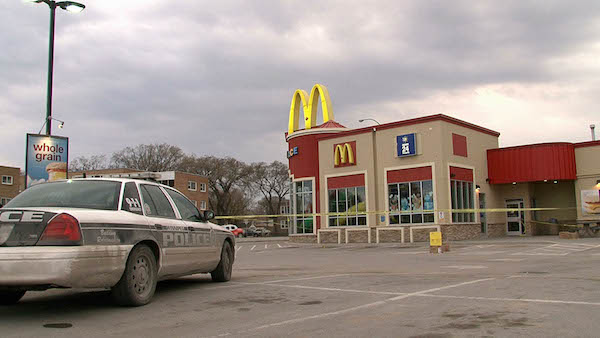 Police tape secures the scene at a McDonald’s in the 1000 block of Notre Dame Avenue on May 18, 2014 after a man was seriously assaulted and later died. (SHAWN McLEOD PHOTO)

Winnipeg police are seeking to speak with a bystander who came forward to assist in a domestic incident before a man fell to the ground and later died.

Officers were called to a McDonald’s restaurant in the 1000 block of Notre Dame Avenue on May 18 at around 5:30 p.m.

Police say a man and woman were involved in a domestic situation, when a bystander became involved in an effort to protect the woman. During the altercation, the Good Samaritan struck the victim, resulting in serious injuries when the man fell to the ground.

The bystander left the scene before police arrived.

The victim, identified as Marlon Dean Laronde (Hart), 33, of Winnipeg died in hospital May 23.

Investigators are requesting that the bystander and anyone else who may have witnessed the incident and not yet spoken with police to contact them at (204) 986-6508.

← Previous: More Manitobans Recycling Than Ever Before: Recycle Everywhere Next: Arrest Made in Homicide of MacGregor Senior →
Tags: Crime | Death | Winnipeg Police