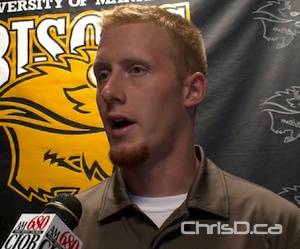 Manitoba Bisons quarterback Jordan Yantz is suiting up with the Winnipeg Blue Bombers this week.

Yantz has been invited to the Bombers’ training camp, which opens Wednesday evening at Investors Group Field.

Yantz, 24, was named as a Canada West conference all-star in 2013 after a successful first year with the Bisons and his fourth year of eligibility. The Regina native finished first in conference passing (fourth in CIS) with 2,474 and first in the league with 25 touchdown passes and threw for a 57.5 passing percentage (145-252).

Yantz also participated in the East-West Bowl earlier this month.