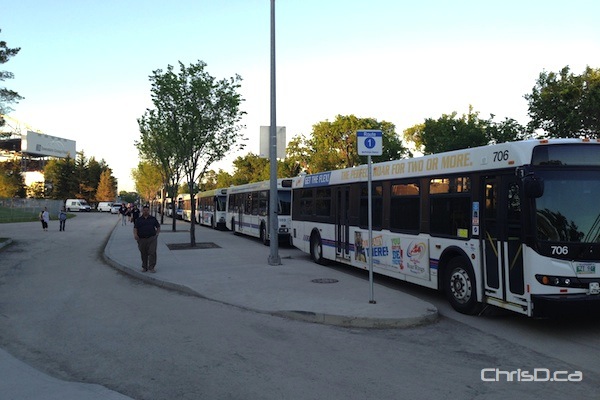 Winnipeg Transit buses wait outside Investors Group Field to shuttle fans back to their vehicles in June 2013. (CHRISD.CA FILE)

The City of Winnipeg has rejected a request from the Winnipeg Blue Bombers for discounted transit rates.

The football club had been seeking a discount on the subsidized rates offered in 2013 to shuttle fans to and from games at Investors Group Field.

“We carefully reviewed the request received from the WFC (Winnipeg Football Club) regarding Transit services for the Winnipeg Blue Bombers’ 2014 season and could not grant their request for a discount from 2013 rates,” said Deepak Joshi, the city’s acting chief administrative officer.

Buses complement a park-and-ride system allowing fans with tickets free access to Winnipeg Transit buses to get to and from their vehicle at designated spots near the University of Manitoba.

Last season, about 35 percent of stadium attendees chose transit as their mode of transportation.