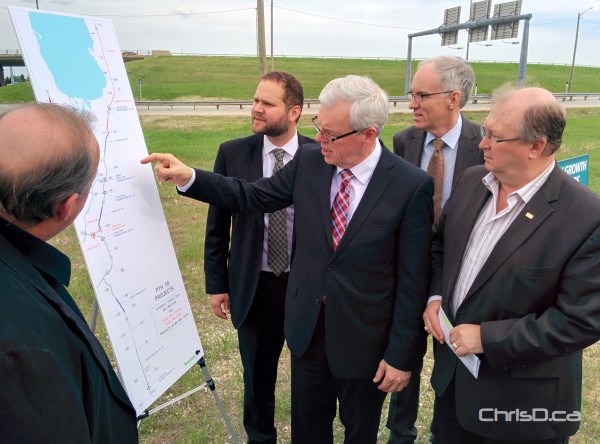 Manitoba Premier Greg Selinger looks over proposed upgrades for Highway 59 and the North Perimeter interchange on Wednesday, May 28, 2014. (CHRISD.CA)

Design work is underway for a major overhaul of Highway 59 and the North Perimeter interchange.

The Manitoba government is spending more than $160 million over the next five years to carry out large-scale paving projects and bridge rehabilitation on the highway.

“PTH 59 is a heavily travelled north-south tourist and trade route, and these road investments will improve the ride for heavy trucks and commuters,” Premier Greg Selinger said. “The new projects include bridge replacements and paving of this roadway to Birds Hill and the east side beach communities of Lake Winnipeg.”

Selinger said the project will see design and tendering take place this year, with planned construction beginning in the fall of 2015 and completed over a three-year period.

Construction of the interchange project is similar to CentrePort Canada Way and will be constructed along much the same timelines, the province said.

Future work along Highway 59 in coming years includes structure rehabilitation at the Red River Floodway near Birds Hill, and 22 km of grade widening, base and bituminous pavement from PR 317 to the south junction of PTH 12.