Crews Put Out Ammonia Fire on Semi Near Shoal Lake 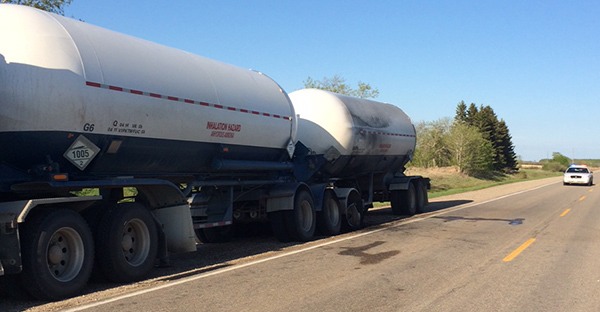 A fire on a semi-trailer truck hauling ammonia was put out on Highway 16 near Shoal Lake on Tuesday, May 27, 2014. (RCMP HANDOUT)

Emergency crews put out an ammonia fire aboard a semi-trailer truck on Highway 16 Tuesday evening.

RCMP were dispatched to the area about 15 km west of Shoal Lake, Manitoba at around 6 p.m.

Police say the semi was hauling anhydrous anhydrous ammonia when the driver noticed a fire on the trailer. He was able to safely pull over and detach the load from the cab. No injuries were reported.

The highway was closed for nearly 90 minutes while crews waited for the tank to cool.

Yellowhead RCMP is investigating the cause of the fire.