Discover the Music of Folk Fest 2014 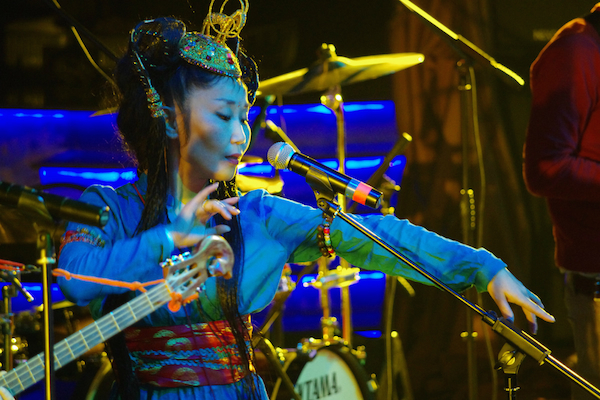 Namgar Lhasaranova’s voice is as immense as her Siberian homeland.

The Buryat vocalist/multi-instrumentalist fronts the group Namgar, which fuses traditional Buryat and Mongolian music of its region. Buryatia, a republic of Russia — with elements of pop, jazz, folk, ambient soundscapes and art-rock that doesn’t sound quite like anything else. Lhasaranova’s impressive vocal range can go from playful and childlike to gigantic and soaring within the space of a few minutes.

The band uses traditional Mongolian instruments, including the yatag (a 12-stringed zither), the chanza (a three-stringed lute) and the morin khuur (a two-stringed bowed instrument), along with electric bass and drums to craft its unique sound, which it has been taking to festival stages around the world from Norway to Malaysia to the United States since forming in 2001.

The melodic music Namgar creates was passed down to Lhasaranova from her grandparents and father, who sang to her as a child. The inventive arrangements are new, but the stories told in the songs are as old as the indigenous Buryats themselves, with tales and myths of ancient Mongol fighters, champions, horses and famous battles.

Winnipeg Folk Festival attendees will have two chances to see this one-of-a-kind act this year: Saturday, when the group plays a concert on the Green Ash stage at 12:30 PM and Sunday as part of the Global A Go Go workshop at the Bur Oak stage at 11 AM, where they will be joined by Noura Mint Seymali (Mauritania, Africa) and Geomungo Factory (South Korea).

Listen to a sample of Namgar’s music on the Winnipeg Folk Festival website.